You are here: HomenextThemesnextFun in the BaynextNatural landscapenextAround Warton Crag - Railway Views - Image 05 - backing onto the train in 1979 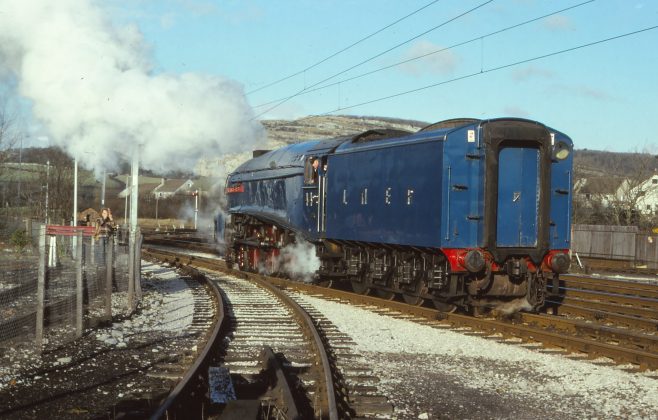 “Around Warton Crag – Railway Views” is another series of photographs celebrating Warton Crag, but the focus is the view of the Crag from the Railways passing nearby. We’re now “only” 40 years ago in 1979, and this celebrity locomotive “Sir Nigel Gresley” was based at Carnforth at that time. Here she is slowly backing down towards Carnforth station off the Barrow line past Warton Crag. The date is very early January and there’s a trace of snow on the summit (or is it the bare limestone reflecting the low winter sun ?). The Crag also appears rather more bare than it is today. Carnforth railway yards and the station itself declined in importance from the late 1960’s onwards, but in recent years the station has been beautifully restored and houses some very interesting local railway history and memorabilia revealing the lives of railwaymen in the steam era, as well as a fine coffee shop ! The sheds are also now home to West Coast Railway Co, who specialise in charter trains. You can get superb views of these historic trains from Warton Crag ……. or to put it another way, you can get superb views of Warton Crag from these trains (or indeed any trains !).