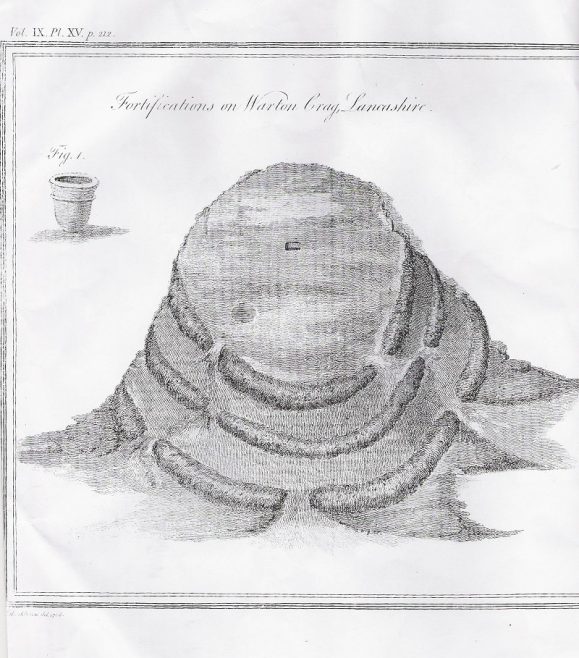 In July 1785 the antiquarian William Hutchinson visited a friend Robert Gibson in the “Yelling” area, and was guided around the remains on Warton Crag by Mr Jenkinson, a local teacher. Hutchinson produced a “birds-eye view” drawing of Warton Crag, the earliest known picture of the site. In 1788 he wrote a letter to his friend George Allan Esq which enclosed this drawing together with a detailed description of his observations. This letter and the drawing are the primary source of evidence for how this site appeared 230 years ago. Hutchinson’s interpretation was that Warton Crag was an Iron Age Hillfort, which may have been used by the Brigantes (the native British tribe which controlled the north of England) as a defensive site against the Roman push horthwards in the First Century AD. This was the generally accepted wisdom until quite recently (see the links to Historic England’s 2017 report for latest thinking), but this picture and the related letter remain of the greatest historical importance. (This drawing is reproduced from Archaeologia 1789,Vol 9, PLXV, page 212).

The Society of Antiquaries of London 1789