You are here: HomenextStoriesnextCycling in Barrow 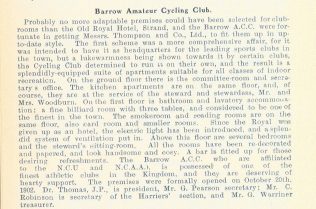 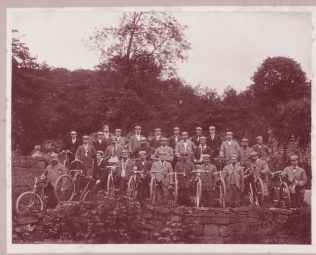 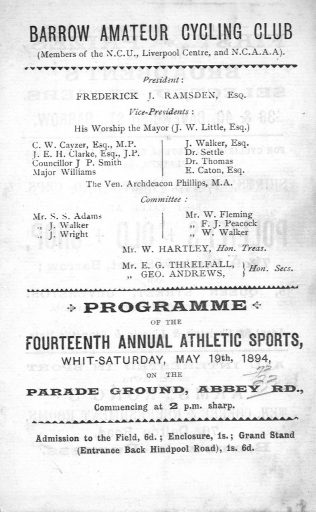 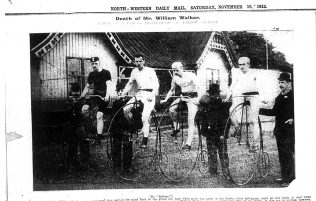 zoom
Walker won the B Challenge Cup in 1884 and 1885 and a championship on the Is Cyclists from the left are James Walker, William Walker, Threlfall North Western Daily Mail 16 November 1912
Copyright: Cumbria Archive and Local Studies Centre, Barrow-in-Furness zoom
Plan of the athletics and cycling stadium at Cavendish Park, Barrow-in-Furness. early 1900s. Membership of the club cost £1 1s for men, 10s 6d for ladies which “provides for all the privileges of the cricket, cycle and football clubs including free admission to the ground and stands.” BDY 240

The club, which opened in 1906, was based in the Old Royal Hotel on The Strand. The accommodation consisted of a committee room, office, billiard room, reading room, smoke room, kitchen and toilets all looked after by a steward and stewardess. The club
continued until the late 1920s.

“Cavendish Park, the site of the Cricket and Football clubs has cycling and running tracks second to none in England. The banked cycling track is of cement and the running tracks of cinders. A commodious grand stand is erected on the west side and the enclosure is computed to hold 20,000 spectators. The ground is under the management of the Barrow Athletic Association Ltd.”

The club was established in 1899 and membership was open to anyone who worked in the shipyard. At the annual dinner held at the Criterion restaurant on 11 October 1902, Mr A J Campbell said the attendance at the club runs had been low but that was probably due to the overtime available in the yard during the summer. He said that cycling gave members the chance to “get a change from the dull shops and the between decks interwoven with bulkheads to the hills and dales of the sweet surround scenery.” The club had 114 members.

Cycling legend Harry Hill of Bury, won a bronze medal in the 4,000m team pursuit at the infamous Berlin games in 1936. When the Second World War broke out, Harry moved to Barrow-in-Furness to help build submarines. It was the end of his professional cycling
career. He moved back to Bury at the end of the war.

The Barrow Central Wheelers was formed in 1933 when two of the clubs of that era combined. The club gets its name from the Barrow Central railway station where the
first club runs started from.