You are here: HomenextThemesnextFun in the BaynextNatural landscapenextAround Warton Crag - Railway Views - Image 06 - waiting for the train from Barrow 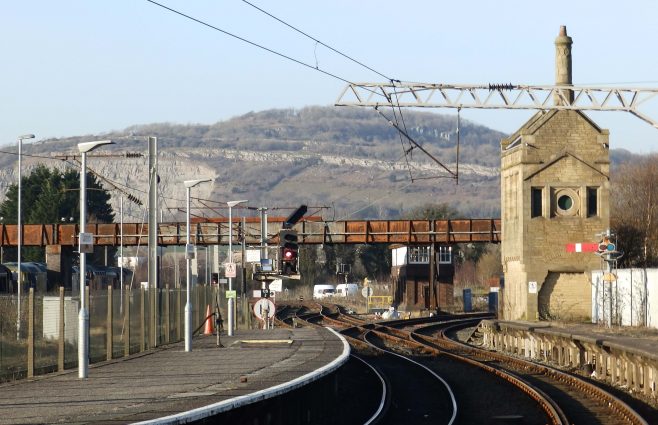 “Around Warton Crag – Railway Views” is another series of photographs celebrating Warton Crag, but the focus is the view of the Crag from the Railways passing nearby. We’re now back in the present, and this photo was taken in February 2017 from Carnforth Platform 2 while waiting for a southbound train from the Barrow line. Warton Crag itself looks rather bare in the winter, but is still stunningly beautiful even with the massive quarry which is now a Nature Reserve. And almost as if to prove the earlier point about the Crag forcing a decision on which route to take, the rails themselves lead the eyes straight to the Crag, with the Barrow route curving to the left of the Crag, and the Wennington route curving to the right. Some other industrial heritage is also in the picture, a working signalbox and a semaphore signal. Not many of either of these left today !