You are here: HomenextThemesnextFun in the BaynextNatural landscapenextAround Warton Crag - Railway Views - Image 07 - still waiting for the train from Barrow !

Around Warton Crag - Railway Views - Image 07 - still waiting for the train from Barrow ! 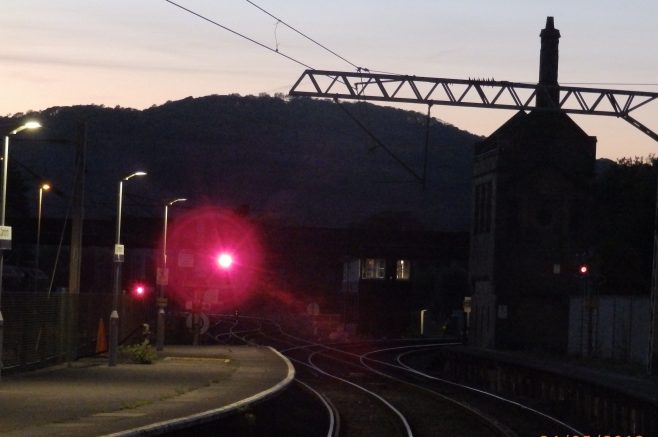 “Around Warton Crag – Railway Views” is another series of photographs celebrating Warton Crag, but the focus is the view of the Crag from the Railways passing nearby. We’re still there on Carnforth Platform 2, and we’re still waiting for our train off the Barrow line !! But 2 points in this photo, first Warton Crag at night not so much dominates the landscape as looms darkly over Carnforth …… perhaps William Hutchinson was right in 1788 when he described Warton Crag as the likely home of cult religious practices ! Second, a little bit of industrial heritage in action. The signalbox is lit as there’s a signalman on duty who controls the junction and the signals possibly still with manual levers, and the semaphore signal on the right has its lamp lit and shining dimly through the red lens. It was once a daily manual operation to climb the signal ladder and check the oil level in the lamp, and it may still be the same here.