You are here: HomenextThemesnextFun in the BaynextNatural landscapenextAround Warton Crag - Railway Views - Image 04 - leaving Carnforth in 1976 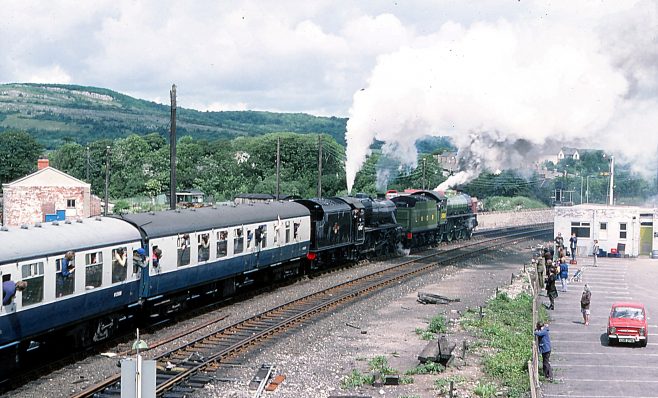 “Around Warton Crag – Railway Views” is another series of photographs celebrating Warton Crag, but the focus is the view of the Crag from the Railways passing nearby.This photo is also from 1976 and was taken in Carnforth from the footbridge off Warton Road over the railway lines to the shed. This footbridge is nowadays locked off from the road very securely ! This special train is taking the Wennington line out of Carnforth, hauled by the same 2 locos from the previous photo. This picture illustrates 3 points …….. Warton Crag has magically appeared in the picture again, looking quite tidy too. It dominates the area and forces communication routes to go past the Crag under the view from the slopes, not over or through it. And the passengers and onlookers are totally oblivious to the Crag. Not much has changed in 40 years, to many people Warton Crag just seems part of the natural furniture and they never give it a second look …….. a mistake !