You are here: HomenextThemesnextFun in the BaynextNatural landscapenextArchaeological Survey Map of results from Warton Crag field-walking between 2014-2016 by White Cross Archaeology Group 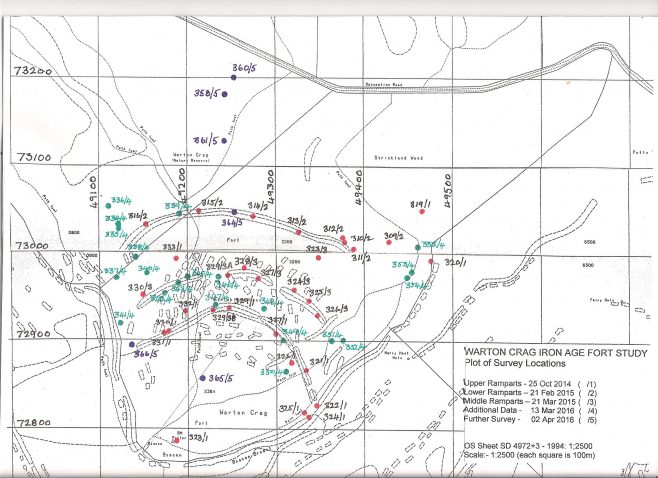 This archaeological survey map was produced in June 2016 and records the results of field-walking undertaken in the period 2014 to 2016 by the White Cross Archaeology Group (WCAG, see Local Groups). The basis for this survey map is the OS 1994 map of Warton Crag, which showed the presumed location of each fragment of the 3 “ramparts” (aka “walls”, “banks” or “enclosing works”). But this map was just the latest of several previous historic surveys which all differed in the detailed location, length, and alignment of the rampart fragments. So the aim of the WCAG field-walking was to record with both hand-held GPS and with camera the details of what could be seen today and exactly where. WCAG has allocated its own unique reference number (e.g. 346/1) to each location plotted and identified as a possible “feature”, most of which are along or close to the presumed line of the 3 “ramparts”. (For photos and descriptions of each plotted location please see separate document). WCAG members started field-walking and recording Warton Crag in 2013, and in 2018 research is still continuing, WCAG now has an archive of over 400 site photos, and much of this material was shared with MBP and Historic England in 2015 and 2016 to help preparations for their joint LIDAR mapping in 2016 and for Historic England’s follow-up surveying in 2017.

IMPORTANT NOTE : the site of Warton Crag is an SSSI and is on private land. Specific permissions are required to access areas off the main footpaths, especially at certain times of year when wildlife considerations are paramount. Conditions underfoot can also be dangerous.