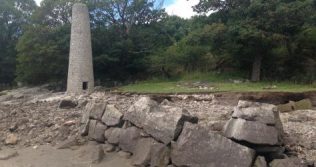 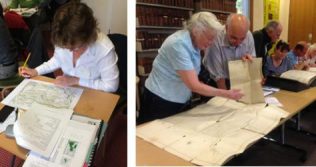 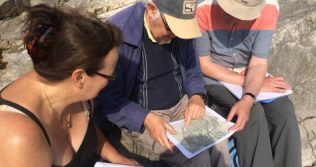 One of the key projects of the Headlands to Headspace community archaeology programme is the investigation of an intriguing chimney site located to the north-east of Jenny Brown’s Point, Silverdale, Lancashire.

The site is a well-known local landmark with many walkers passing the site on a daily basis as they follow the route of Lancashire Coastal Way. The date, function and demise of this site has been discussed and documented over the years, which present a number of possible functions; a beacon, a limekiln and the most popular and widely accepted interpretation as a late 18th century copper smelter.

A group of dedicated volunteers have been undertaking the first stages in a programme of archaeological investigation, which will hopefully unravel some of the mysteries and find conclusive evidence of its function and date.

Work started in June 2015 with volunteers participating in training workshops, providing them with opportunities to understand how and where to undertake documentary research. Perhaps an old tax record, map or lease could hold the key to the function of the site?

A visit to the County Archives in Preston, was arranged where an archivist gave the volunteers a fascinating tour of the facilities, the types of documents that may be useful in their research and the challenges of looking at old documents- such a deciphering old writing.

The volunteers also visited with experts to look for archaeological evidence ‘on the ground’.

Using a bespoke guide the volunteers are currently busy pulling together the information they have researched and collected from the Historic Environment Record, County Archive Service, Historic England, the Archaeological Data Service and other resources, into an archaeological desk-based assessment. There have been some interesting discovers made so far with the report due in late October 2015 so watch this space!

To compliment the documentary research, a series of volunteer field training and recording sessions have been undertaken, to make a permanent written and drawn record of the site. This has included working alongside the national CITiZAN project and Oxford Archaeology North to set out survey stations and capture an aerial view of the site.

Wall foundations, a possible revetment or jetty and even small fragments of metal ore are eroding from the salt marsh, all of which are in danger of being washed away through coastal erosion.

Before any further evidence is lost, the volunteers have been making scaled drawings of the archaeological features being exposed and helping Cultural Heritage Officer Louise Martin identify areas for further field investigation and research.