You are here: HomenextThemesnextFun in the BaynextNatural landscapenextAround Warton Crag - Railway Views - Image 01 - from the Crag Summit

Around Warton Crag - Railway Views - Image 01 - from the Crag Summit 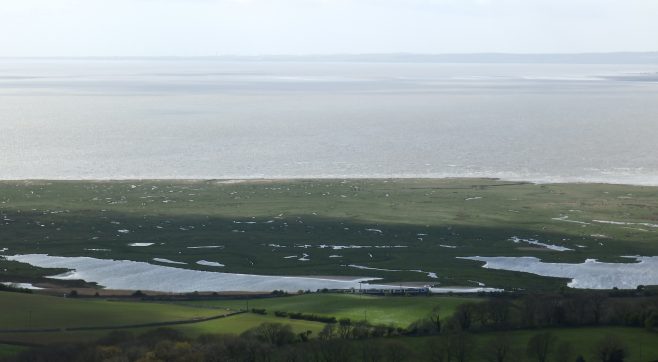 “Around Warton Crag – Railway Views” is another series of photographs celebrating Warton Crag, but this time the focus is the view of the Crag from the Railways passing nearby. We start with this photo, taken from the Summit of the Crag in May 2018. This view is looking straight out into the Bay past the RSPB reserves, but if you look carefully you can also see a TransPennine train on the way to Carnforth and Manchester Airport. The railways were hugely important in opening up communications and trade to / from the rather isolated Furness area, and their importance to local communities becomes even clearer whenever there is some disruption. Even today when there is less rail-borne bulk iron-ore, coal, or steel to be transported, the railway comes into its own with safe running of the Sellafield nuclear flask traffic ……..and long may it remain on the railway not the road !