You are here: HomenextStoriesnextThe Romans are Coming,  Don’t Panic !!!  …

In 1785 the antiquarian William Hutchinson visited Warton Crag, and in 1788 he wrote a letter to a friend which included this amazing “birds-eye” drawing of Warton Crag. 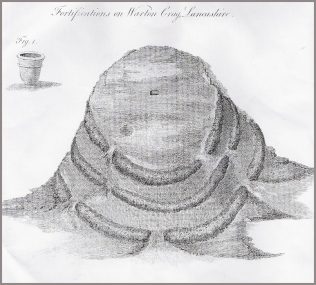 This image itself is well-known, but the 1788 letter to his friend George Allan Esq also includes a detailed description and interpretation of what he saw, plus his thoughts on what events may have occurred here. He was in no doubt that Warton Crag was the location of our native British heroes pluckily resisting the Roman advance northwards in the first century AD, possibly aided by some very dubious local wizards ! 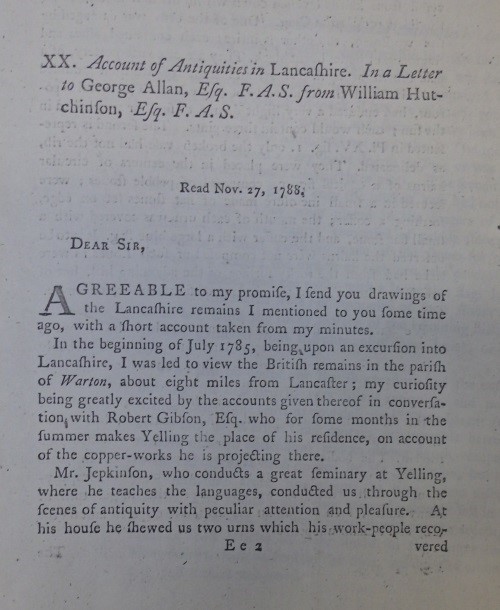 1788 letter from Hutchinson to his friend George Allan Esq

This letter, including 2 large illustrations, was published in Archaeologia 1789 (Vol 9, Section XX, pp 211-218).  The whole letter is of great historical interest, as well as being a very stimulating read !  So here are 3 extracts to enjoy, whether or not you believe in their historical accuracy !

Derivation of the name of Warton …..

“The etymology of the name of Warton has been variously conjectured upon ; and from the fortifications we are about to describe, with the kairns and tumuli before noted, Mr Jenkinson is pleased to adopt the common acceptation ; and thinks the place took its name from “Werre” (Teutonic) , this being the frequent scene of warfare. We beg leave to mention a conjecture, that the name of this place may be of the most remote antiquity, and derived from the sages who inhabited the hill with the British tribes. The appellation of “Weird” was given to the British “wizzards”, or wise men, who possessed and practised divination ; to which those ages of ignorance and superstition, and uncultivated people were particularly subject ; so that conceiving the name of the place to be “Weird Town” , it would express it to be the town or residence of the sages and oracular priests”.  (p.213)

So now we finally know!

This describes how Hutchinson thought the ancient Britons had “improved the natural stronghold and rendered it impregnable” by building 3 concentric “walls” of differing thicknesses, and with entrances through each wall offset from each other. Here’s his thinking about this design ……

“The variation of the gates gives us an idea of the engineer’s military skill who projected the works ; for if an enemy by a column could force the outward gate, they must extend their front, or expose the flank of the column, in order to approach the gates in the second wall, and likewise the third ; and thereby give the besieged an advantage over them, as they lay open to troops fighting with missile weapons under cover of their walls ; for the slope of the hill is such, that men who lined the upper walls looked down upon the balliums or spaces between all the walls, and could command them with their instruments of war”.  (page 214)

Hutchinson provides his interpretation of the location and its “probable” history ……..

“From the area you have an extensive sea and land prospect, commanding the chief part of the land of Furness on the one hand, and all the vale of Burton with Ingleborough and the chain of mountains to the north and east. This fort could annoy the Roman stations of Lancaster, Overbarrow, and Watercrook ;  and probably here our British heroes maintained their liberty for a considerable time, in that dreadful state of invincible virtue, indefatigable labour and hardship, and desperate bravery spoken of by Tacitus, and the Roman writers, in a language injuriously descriptive of barbarism and savage manners”. (page 215)

This whole letter is beautifully written and is thoroughly recommended !

Hutchinson also made observations about 2 probable burial urns, many “kairns” and tumuli, and several other features all having been found in the area of Warton Crag. And indeed 2 parts of an Iron Age sword were also found somewhere in or near Warton in 1857, and eventually found their way into the British Museum where they still reside. 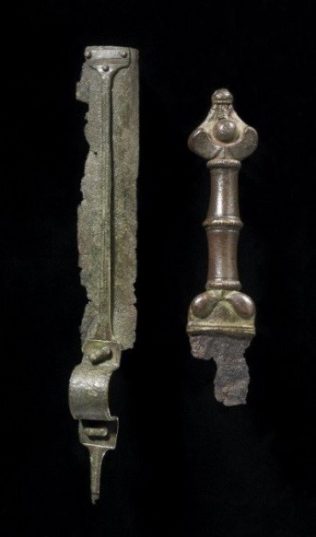 More recently in 2005, fragments of a Roman Tombstone were found in Lancaster, and after many years painstaking work, this has been pieced back together and is now on display in Lancaster Museum. It has been dated to c.75 – 100 AD, and it depicts a Roman cavalryman named Insus holding the severed head of a native tribesman.

The Romans’ usual policy was first to attempt to cajole, bribe, or threaten the local tribal leaders into not resisting the Roman advance, then take brutal reprisal action if there was any sign of resistance either then or later. 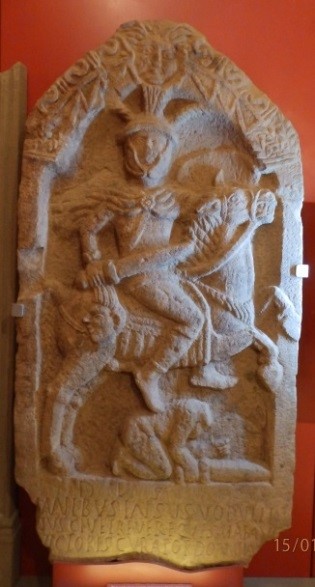 However although these 2 superb finds are suggestive, they are not evidence of any specific local events. Indeed the tombstone could be “honouring” earlier actions elsewhere in Britain or in other Roman provinces by the deceased officer, who was from the Treveri tribe in Germany. Nor is there currently any archaeological evidence on the ground to point to any actual local resistance to the Romans, either at or near Warton Crag itself. Indeed there is some evidence of trade or at least contact, as small Roman items were found during excavations at the Dog Holes cave below the Crag in 1910-12.

So to sum up, the view that Warton Crag was an Iron Age Hillfort (i.e. was essentially defensive in nature) has long been the accepted wisdom, but there has never been any truly objective evidence to support this view, nor that it was the site of any actual military action. The traditional Iron Age Hillfort interpretation also changed quite recently when Historic England’s most recent survey and report from 2017 was published. This suggests that the site of Warton Crag may actually date further back into the Bronze Age, and be more of a stock enclosure than a defensive position. (It may of course also have changed in purpose or been adapted over time).

However we may never know the truth of any of this either way, until / unless some excavations or other forms of scientific analysis are commissioned. And as a Scheduled Ancient Monument as well as a Site of Special Scientific Interest, full permissions would need to be sought and granted from Historic England, the landowners, and the conservation groups who manage parts of the site. This would require some very robust and professional planning, and of course funding too. One day this might happen, but don’t hold your breath !

In the meantime let’s just carry on enjoying William Hutchinson’s 1788 vision of the Britons of Warton Crag “annoying” the Roman garrisons of Lancaster, Burrow-in-Lonsdale, and Watercrook !