You are here: HomenextStoriesnextShipbuilding in Barrow-in-Furness 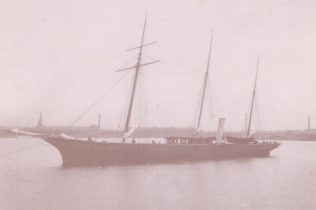 “Thousands of men are even now employed and Old Barrow Island-two years since quite a pleasant rural nook, with fields of waving grain and blooming hedgerows-has been transformed with almost magic rapidity into a teeming hive of industry. Around the gigantic works, within which the sound of the smiths’ and riveters’ hammers are already beginning to re-echo, has grown quite a little town of wooden houses, constructed for the temporary accommodation of workmen until a sufficient number of brick dwellings have been provided.”

The Barrow Iron Shipbuilding Company was established by the Furness Railway Company in 1870 to build iron ships on Barrow Island. Robert Duncan, a famous Scottish shipbuilder, designed the works and became the first managing director. The company’s first ship was the steam yacht “Aries” built for Sir James Ramsden. The first naval ships to be built were the “Foxhound” and “Forward” built in 1877. The “City of Rome” launched in 1881 was one of the largest ships in the world at the time. In 1882 13 merchant ships were launched by the yard with another 16 in 1883. The first submarine to be built was “Nordenfeldt” in 1886, a steam engine submarine built for Turkey and designed by Thorsten Nordenfeldt of Sweden.

In 1888 Barrow Shipbuilding Company was taken over by Naval Construction and Armaments Company Ltd. A year later, the yard got it’s first order from the Admiralty for 3 cruisers. Unfortunately the yard could not deliver vessels complete with guns, mountings and ammunition. In 1896 the yard was bought by Vickers Sons and Company for £430,000 who changed the name of the yard to Vickers Sons and Maxim Ltd and armaments were then produced in Barrow. The company continued to build warships for Britain and overseas including the Mikasa and Katori for the Japanese. Cruise liners and merchant ships were built alongside the naval vessels.

In 1901 the yard launched HM Torpedo Boat 1 (usually called Holland 1), the first of the five submarines designed by John P Holland. She was the first of many submarines built in Barrow, including ones built for Australia, Brazil and Estonia.

During the First World War, construction of naval vessels, submarines and engines, guns and ammunition for ships built elsewhere, increased. 31,000 were employed in the shipyard in January 1917. But after the war, the construction of warships ceased and attempts were made to build more merchant ships. The yard had changed its name to Vickers Ltd in 1911 and in 1928, the firm took over Armstrong Whitworth and Company including Walker Naval yard on the Tyne. Merchant ships and submarines were built in Barrow and naval ships on the Tyne until the rearmament programme of the 1930s meant that naval ships were once more built in Barrow. During the Second World War 8 destroyers, 1 cruiser, 2 light fleet carriers as well as 86 submarines and 18 midget submarines were built.

Passenger liners such as Oronsay, Oriana and Chusan were built in the 1940s and 1950s but orders dried up and the yard then built tankers including British Admiral in 1965 and Methane Princess in 1964. HMS Invincible was launched in 1977 by Queen Elizabeth II. HMS Bulwark, HMS Albion and HMS Wave Knight, launched in 2000 and 2001, were the last surface ships to be built at Barrow. The yard continues to build submarines, the Astute Class are now under construction and plans for Successor are being made by BAE Systems, Marine.