You are here: HomenextPlacesnextFlookburghnextCatching Tales 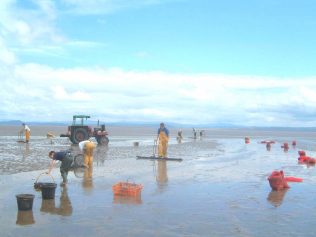 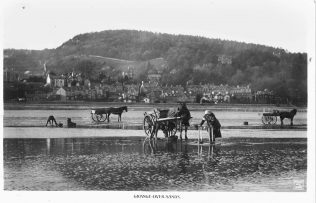 zoom
Cocklers on the sands at Grange c1912 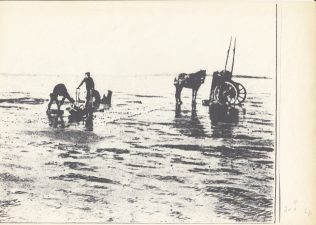 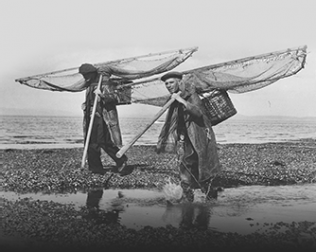 Shrimpers and cockle pickers stretching along Morecambe Bay’s coastline are proud to use family fishing techniques that go back generations.

On the north side of the Bay, predominantly in Flookburgh, fishing was practised using horse and cart. Over the years this progressed to tractor and trailer and quad bikes. On the east side, in Morecambe, Heysham and Sunderland Point, they mostly fished by boat. There was a time when fishing was done by sail, with no engines or refrigeration in sight. Despite the advancement of modern technology, certain traditional ways of fishing remain. Fishermen still ’trawl for shrimps’ using a beam trawl and shrimp net attached to the back of a boat or tractor. Cockles are still gathered using traditional tools such as the cockle basket, the jumbo and craam.

For many fishing has never just been a career. It’s been a way of life. Today, there are only a handful of local fishermen and one fisherwoman left to keep the traditions alive.

My first memories were going out with my grandfather, going out with a horse and cart across the sands to nets that had been set out…You were expected to work like men. Cockling was a very manual hard job and sometimes the sand could be nearly as hard as concrete…me Uncle Bill said “Ay, but you’ll have to be as hard as it is [Jack Manning, retired Flookburgh fisherman].

Catching Tales , a three-year oral history project, has been collecting fishing-related stories and memories. An archive of first-hand accounts from over 50 people, past and present, has now been captured before they’re lost forever.

Ian McClure, a fisherman from Flookburgh, remembers his father sending off bags of cockles on the train, and then receiving a letter back saying they’d been condemned and he wouldn’t be receiving any money for his two days’ work:

“I wouldn’t have sent ‘em any more. Well when tha’s nowt else, he said, yer had to send ‘em. Hunger’s a sharp thorn, as they say.”

Shrimps were sealed in butter to keep them fresh when there was no refrigeration.

Coming home from school and when it was shrimping time we always had a huge pile of shrimps on the kitchen table. We’d all be sat round picking them and Dad would sometimes hide little coins or pennies inside to try to encourage us to keep going…when times were hard we used to live off fish. Fried mussels for breakfast, fish for lunch, shrimps for tea (Helen Graham, daughter of Sam Baxter who managed the local fishing cooperative Morecambe Trawlers).