You are here: HomenextThemesnextFun in the BaynextNatural landscapenextApproaching Warton Crag - A Walk around the Bay - Image 01 - from Morecambe Prom 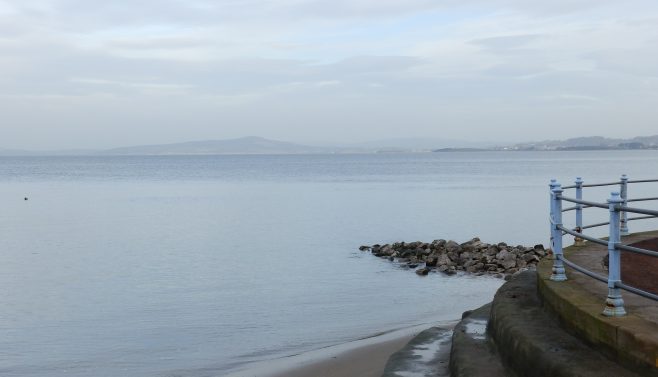 “Approaching Warton Crag – A Walk around the Bay” is a series of photographs celebrating the changing moods and beauty of the view across Morecambe Bay and along the coast to Warton Crag. This photo was taken on a misty December day in 2016 from the prom at Morecambe where our walk begins. Warton Crag here looks a bit like a distant Vesuvius overlooking the Bay of Naples, but let’s hope Morecambe won’t ever be another Pompeii !

Historical Note : The Crag’s history itself is complex.There are archaeological remains around the summit which are now believed to have originated in the Bronze Age. Moreover some Bronze Age or Iron Age items were allegedly found on the slopes, and Neolithic animal bones and even a few small Roman items were found during the 1910-12 excavations in caves on the lower reaches of the Crag. So the history has always been open to varied interpretation, and this debate continues even today. However there is little doubt about 2 points, first that the earliest finds in the area probably date back to the Neolithic period, and there were probably Bronze Age and Iron Age occupations too. And second, it is probably stating the obvious that Warton Crag physically dominates the eastern end of Morecambe Bay and is highly visible for miles around, not only from the Bay itself, but also from the strategic land communication route north and south which passes close to the east of the Crag. So no invading force coming from any direction, by land or sea, could avoid being spotted from the summit of the Crag. (For more detail of the History and Archaeology, see the Documents section).