You are here: HomenextThemesnextWorking in the BaynextFishingnextPortrait of Dick Raby, Keeper of Plover Scar and Cockersand lighthouses, at Plover Scar fish trap 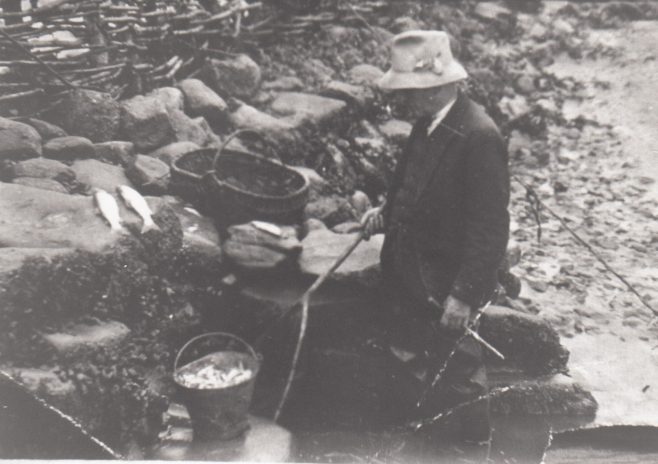 Dick Raby, Keeper of Plover Scar and Cockersand lighthouses at Plover Scar with fish from the fish trap and a bucket of smaller fish. The lights were built in 1847 at the entrance of the Lune estuary to help ships navigate into the estuary, to reach Glasson Dock and then onwards via the Lancaster Canal to the port of Lancaster, with Plover Scar marking the rocky outcrop at the edge of the deep water channel into the estuary. Prior to automation the lighthouse keepers and their families lived in the base of the lighthouse structure, but this was later replaced by Abbey Lighthouse cottage on Slack Lane. The cottage still stands today. The Rabys maintained both lighthouses, walking across to Plover Scar at low tide. They were keepers for both the lighthouses for the first 100 years with Francis Raby in 1847, followed by Henry Raby in the late 1870s and finally Dick Raby and his sister Janet Raby who held the positions until the end of 1945 when it was taken over by the Parkinson family. Bob Parkinson’s oral history is in the archive.