You are here: HomenextThemesnextWorking in the BaynextFishingnextFishing boat "Mascot" LR 1 alongside "Fanny" LR 4 on moorings in the Ring Hole 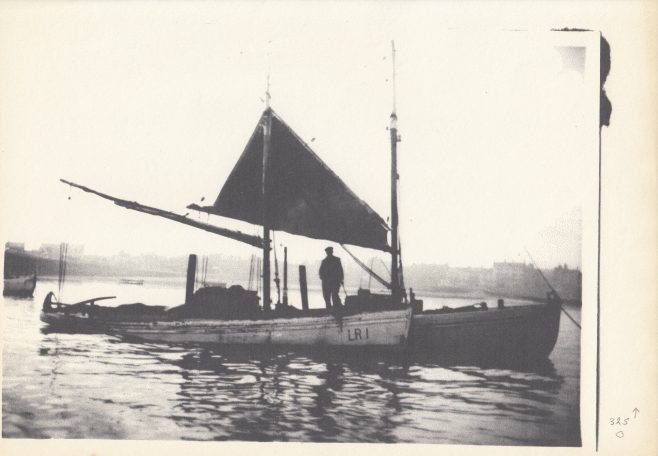 “Mascot” alongside “Fanny” on moorings in the Ring Hole. “Mascot” was registered at Lancaster as LR 1, she was built at Crossfields of Arnside in 1913. She was 27 ft overall with a beam of 9 ft and weighing 6.75 tons. Built originally for Harry Mout of Morecambe, she was sold to George Willacy (11.7.30), then John Thomas Woodhouse (18.12.34) and Richard Woodhouse (10.5.35). “Fanny” was built at Crossfields of Arnside and was registered at Lancaster as LR4. Seen here on inside moorings for a spring paint up, “Fanny ” was built at Arnside, 1912 for David Willacy, being 28 feet overall with a beam of 9 feet 6 inches, weighing 6.56 tons. She had a motor and was rigged with a mainsail, foresail, jib and a gaff topsail with a crew of two. She was later owned by Reuben Willacy and then Gilbert Willacy.